We will be discussing one Ninth Circuit case and one Federal Circuit case during our weekly SoCal IP Institute meeting on Monday, April 16, 2012. Brief synopses are presented below. 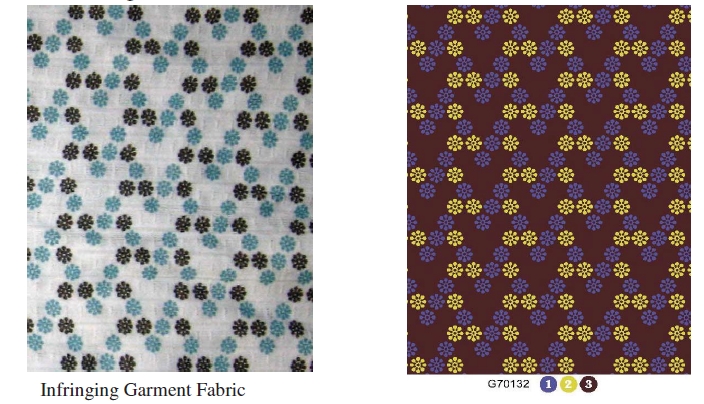 The C30023 was registered as a collection of unpublished works.  However, two of the designs had been previously published.  After the suit began, this issue was corrected by LA Printex at the Copyright Office by a supplemental registration.  There were cross motions for summary judgment.  The defendants’ motion was granted on the basis that there was no genuine issue of material fact that the defendants had access to the C30020 design or substantial similarity.  Defendants then moved for and received attorneys fees.  LA Printex appealed.

LA Printex argued that the district court’s determination that there was no “access” to the design was faulty.  In particular, they asserted that the court’s relianceonly upon a declaration by an LA Printex employee.  However, the 9th Circuit found substantial additional invoices showing more than 50,000 yards of C30020 fabric sold from 2002-2008 in the trial record.  The question then was whether this was “widely distributed” as claimed by LA Printex, thereby demonstrating a genuine issue of material fact as to Aeropostale’s access to the pattern.  The court described the various levels of access required to show “wide dissimination” under copyright “access” jurisprudence in different contexts.  Based upon the sales, mostly to local Los Angeles fabric converters and the invoices, the 9th Circuit reasoned that a reasonable jury could find widespread dissemination of the C30020 design.  Thus, there was at least a genuine issue of material fact as to Aeropsotale’s access.

The 9th Circuit then took up the district court’s determination that the works were not substantially similar.  Though there were differences between the designs and elements of the design were not protectable by Copyright, the 9th Circuit pointed out that questions of substantial similarity should rarely be decided at the summary judgment phase.  Based upon an extrinsic (objective) evaluation of the designs and an intrinsic (subjective) evaluation, the 9th Circuit found that the question should at least be put to a jury.

Finally, Aeropostale argued that the registration was faulty and invalid. Therefore, they argued, they were entitled to summary judgment on this alternative ground.  The 9th Circuit reasoned that the original registration included an error that was subsequently corrected.  The inclusion of an error regarding two other designs does not render the C30020 registration invalid or bar LA Printex’s suit.  The summary judgment was reversed, the attorney’s fee award vacated and the case remanded for further proceedings.

In re Becton, Dickinson and Co., Case No. 2011-1111 (Fed. Cir. April 12, 2012) (attached).  Becton, Dickinson and Company (“BD”) appealed from the final decision of the Trademark Trial and Appeal Board (“TTAB”) affirming a refusal to register BD’s design of a closure cap for blood collection tubes as a trademark on the ground that the design is functional. BD also appealed the Board’s determination that the mark has not acquired distinctiveness. The Federal Circuit did not reach the issue of acquired distinctiveness. The Court held that the mark was not registerable because the mark as a whole was functional.  The cap is depicted below:

Judge Linn dissented, faulting the majority for deciding the case “piecemeal” rather than reviewing the proposed mark as a whole.

All are invited to join us in our discussion during the SoCal IP Institute meeting on Monday, April 16, 2012 at Noon in our Westlake Village office. This activity is approved for 1 hour of MCLE credit. If you will be joining us, please RSVP to Elisha Manzur by 9 am Monday morning.