Our weekly SoCal IP Institute meeting on Monday, August 31, 2015 will be a discussion of the USPTO’s Guidelines on Patentability and a Federal Circuit case:

Varsity Brands et al. v. Star Athletica, Case No. 14-5237  (6th Cir. Aug. 19, 2015) (available here). On appeal, the Sixth Circuit reversed a district court decision that “a cheerleading uniform is not a cheerleading uniform without stripes, chevrons, zigzags, and colorblocks, and therefore Varsity’s copyrights are invalid.”  Varsity registered several uniform designs with the copyright office, including those shown below. 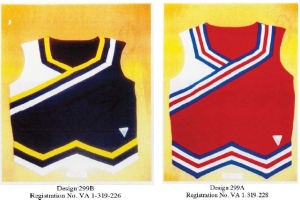 Star argued in cross summary judgment motions at the district court that (1) Varsity’s designs cover useful articles and are, therefore, not copyrightable and (2) the pictorial, graphic, or sculptural elements of Varsity’s designs were not physically or conceptually separable from the uniforms, making the designs ineligible for copyright protection.  The district court agreed with the second contention, finding that the elements of Varsity’s designs were not physically separable from the utilitarian function of the uniforms.

Varsity argued several points in its appeal.  First, that the district court did not afford sufficient deference to the Copyright Office’s determination that the copyrights were valid.  Second, that the district court used the wrong approach to determine whether the copyrightable elements were separable from the utilitarian aspects of the article.  Third, that the registrations were for “graphical works” not useful articles and were, therefore, copyrightable.

The Sixth Circuit first determines the appropriate standard, previously unstated in the Sixth Circuit, for the presumption of validity of a copyrighted work.  The Sixth Circuit adopts the so-called Skidmore deference. This is a weak deference adopted in view of the cursory examination that merely serves to shift the burden of invalidation to a potential infringer.

There are many proposed tests for conceptual separability, with at least the Second and Fourth Circuits relying upon a hybrid of several of these tests.  The Sixth Circuit adopted a series of inquiries regarding whether the useful article can be identified, the underlying design can be identified separately and, last whether the identified design can exist independently of the useful article.  upon evaluation, the Sixth Circuit found that the particular arrangement of chevrons, zig zags and other decorations on the uniforms can exist independently of the useful article (the uniform).  Therefore, the designs were entitled to copyright protection.

The Sixth Circuit then reinstated state law claims dismissed by the district court because the dismissal of the copyright claim was reversed and to enable the plaintiff to amend its complaint to satisfy the requirements of diversity jurisdiction.  The case was remanded to the district court for further proceedings.

Hyatt v. Lee, Case No. 2014-1596 (Fed. Cir. Aug. 20, 2015) (available here).   Mr. Hyatt appealed from a district court decision that it lacked subject matter jurisdiction over his  Administrative Procedure Act claims against the Patent and Trademark Office (“PTO”) and its acting Director under 5 U.S.C. § 701(a)(2) and, alternatively, that the PTO would have been entitled to summary judgment for his claims. The Federal Circuit affirmed on the basis that the Patent Office was entitled to summary judgment.

In order to deal with these applications, the PTO began issuing formal Office actions called “Requirements” specifically to Mr. Hyatt’s families of applications sharing a common specification.  These Requirements require Mr. Hyatt to select a claim set smaller than 600 claims, identify the earliest applicable priority date and supporting disclosure for each claim, and present a copy of the selected claims to the PTO.  These requirements can be quite onerous and long.  Ordinarily, applications and their prosecution history filed before June 8, 1995 are held confidential until issued.  Some of the information in these Requirements involved disclosures of non-issued patents which Mr. Hyatt sought to have expunged from the records of public applications/patents by petition.  His requests were denied.

Mr. Hyatt appealed the denial of these petitions to the E.D. Va. naming the Acting Director Lee in the suit.  The PTO moved for dismissal as lacking jurisdiction to hear an appeal of the petitions and, alternatively, that the PTO would be entitled to summary judgment because the petition decisions were decisions left to the discretion of the PTO and, under these quite unusual circumstances, the special rules were necessary to effect an efficient prosecution of these cases.

Here, the Federal Circuit found the the decision was reviewable as an exception to a law (35 U.S.C. 122), but found that the PTO was justified in its exception to the rule here because of the extremely unusual circumstances and the, seeming, identical or nearly identical nature of many of the pending claims across numerous applications.  The Federal Circuit found that the PTO was justified in issuing the Requirements in an effort to effect efficient prosecution, because all of the specifications have already, seemingly, been published as issued patents, and to help bring down the backlog of over 400 pending cases which, when issued, would have seventeen year terms.

All are invited to join us in our discussion during the SoCal IP Institute meeting on Monday, August 31, 2015 at Noon in our Westlake Village office. This activity is approved for 1 hour of MCLE credit. If you will be joining us, please RSVP to Noelle Smith by 9 am Monday morning.