We will be discussing two Federal Circuit cases during our weekly SoCal IP Institute meeting on Monday, December 10, 2012. Brief synopses are presented below.

In 2009, Pregis sued Free-Flow for declaratory judgment of invalidity and non-infringement of Free-Flow’s Patent Nos. 7,325,377, 7,526,904 and 7,536,837.  These patents relate to air-filled packaging technology used for shipping boxes.  In the same lawsuit, Pregis also sued the USPTO alleging that the  issuance of the patents by the PTO was arbitrary, capricious, an abuse of discretion or otherwise not in accordance with the law.  Pregis sought to hold unlawful and set aside the actions of the PTO in issuing two of the patents at issue. Pregis argued that under the Administrative Procedures Act (APA), the issuance of the patents should be nullified by the court.

The district court for the Eastern District of Virginia rejected Pregis’ claims for lack of subject matter jurisdiction, holding that “the Patent Act and its own scheme clearly expresses Congress’ intent to preclude putative third party infringers from seeking judicial review” under the APA of PTO decisions to issue patents.

On appeal, the Federal Circuit affirmed the dismissal. The Court held that a potential infringer cannot sue the PTO under the APA to attack the validity of an issued patent. The Court stated that judicial review of PTO decisions to issue patents may be precluded when Congressional intent to do so is “fairly discernible in the statutory scheme.”

The APA authorizes judicial review only where the agency action is “made reviewable by statute” or where there is a “final agency action for which there is no other adequate remedy in a court.”  The Court stated that third parties have an “adequate remedy in a court” for challenging an issued patent, such as inter partes reexamination or suits in court.

John Deere sued Bush Hog for infringing its U.S. Patent No. 6,052,980, which is toward an “easy clean dual wall deck” for rotary cutters.   A rotary cutter is a device pulled behind a tractor and used to mow wide swaths of ground.

On appeal, the Federal Circuit reversed the district court’s decision as erroneously construing the term “into engagement with” to require direct contact.  The Court looked to the specification of the patent which illustrated that “engagement” included indirect contact between the upper and lower deck walls. For example, the patent discloses a filler plate (blue) that provides the engagement between the upper deck (yellow) and the lower deck (red). 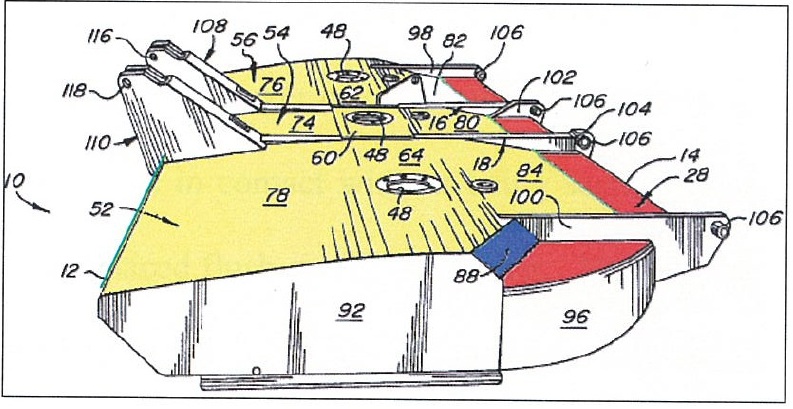 The Federal Circuit also reversed the district court’s determination that John Deere could not assert the doctrine of equivalents.  The district court had held that because they construed “contact” to mean “direct contact,” allowing no direct contact under the doctrine of equivalents would vitiate the court’s construction.  In reversing, the Federal Circuit stated that a reasonable jury could find that a small spacer connecting the upper and lower deck walls represents an insubstantial difference from direct contact.  Thus, the trial court had erred by invoking the vitiation exclusion in this context.

All are invited to join us in our discussion during the SoCal IP Institute meeting on Monday, December 10, 2012 at Noon in our Westlake Village office. This activity is approved for 1 hour of MCLE credit. If you will be joining us, please RSVP to Noelle Attalla by 9 am Monday morning.