For our weekly SoCal IP Institute meeting on Monday, February 13, 2017, we will discuss the following:

In re Big Heart Wine LLC, Serial No. 86376188 (TTAB January 20, 2017) (available here).  Here, the TTAB is considering an appeal of a refusal to register the mark 100 PERCENT WINE for goods including “wine” which was refused registration as likely to be confused under Lanham Act Setion 2(d) with the registered mark CENTO PER CENTO, also for “wine”. The examining attorney translated the mark CENTO PER CENTO is “one hundred percent” and refused registration of 100 PERCENT WINE as likely to be confused with CENTO PER CENTO under the doctrine of foreign equivalents.

The applicant argued that the doctrine of foreign equivalents did not apply when so few (they argued less than 0.3% of the American populace) spoke Italian. The TTAB rejected this argument stating that any determination of the language skills of the ordinary consumer is irrelevant under the doctrine of foreign equivalents. After considering all of the du Pont factors, the TTAB affirmed the examining attorney’s refusal. 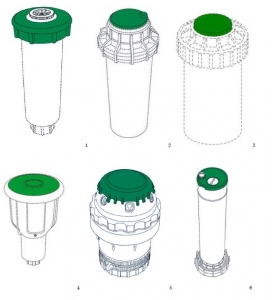 The examining attorney refused registration on the basis that the color is functional and that the mark is not inherently distinctive and lacks acquired distinctiveness.

The TTAB considered first the functionality rejection. Orbit argued that the green color was not “essential” to the function, that it increased the cost of production, and that others use various colors. The TTAB responded pointing to an earlier case indicating that a mark may still be functional if the “exclusive appropriation of that feature would put competitors at a significant non-reputation related disadvantage.” In this case, eliminating green from the colors available for sprinkler heads would limit competitor’s ability to make sprinkler heads that blend in with typical grass colors. The TTAB concluded that this color was functional.

All are invited to join us on Monday, February 13, 2017, at noon in our Westlake Village office. This activity is approved for 1 hour of MCLE credit. If you will be joining us, please RSVP to Elisha Manzur by 9 am Monday morning.