Our weekly SoCal IP Institute meeting on Monday, February 9, 2015 will be a discussion of:

In re Imes, Case No. 2014-1206 (Fed. Cir.  January 29, 2015 ) (available here).  Here, Mr. Imes appeals a rejection of his U.S. patent application number 09/874,423 directed to a device for communicating a digital camera image and video information over a network.  The Patent Trial and Appeal Board (PTAB) affirmed the examiner’s rejection of the claims as obvious in view of three patents, the last being U.S. Patent No. 7,173,651 to Knowles.  The dispute centers on whether Knowles discloses a “second wireless communication module” because Mr. Imes claims requires two, distinct modules.

The examiner construed, and the PTAB affirmed, Knowles disclosure of a memory card that may store and be used to transport image and video files, as a “wireless” communication module because it did not rely upon wires to relay the digital images and video.  The Federal Circuit here finds that this construction of “wireless” is far beyond “reasonable” under the requirement that the definition comport with the “broadest reasonable construction.” Even move basic, the application itself defines “wireless” to mean:

communications, monitoring, or control system[] in which electromagnetic or acoustic waves carry a signal through atmospheric space rather than along a wire.

The memory card clearly did not operate in any electromagnetic or acoustic way and thus was not “wireless” within this meaning.

For the first time on appeal, the solicitor acting on behalf of the Patent Office argued that there are two memories in the device shown in Knowles and, thus, the internal memory operating through the disclosed wireless interface can create a “first wireless communications module” and the memory card operating through the same wireless interface can create a “second wireless communications module.”  The Federal Circuit refused to consider this new basis.

Several other claims were rejected by arguing that Knowles and another reference disclosed the required “wirelessly communicat[ion of] streaming video to a destination.” The examiner argued, and the PTAB affirmed, that Knowles did not explicitly disclose streaming video, but that it was inherent in the laptop computer shown in Knowles because a contemporary press release for the computer indicated that it included a video camera that could be used to record videos and, subsequently, to email them to recipients.  The Federal Circuit found that while it is proper to rely upon outside materials to establish inherency of a disclosure provided by a reference, emailing a recorded video is not the required “streaming.”  Thus, these claims were also allowable over the cited references.

In re Calder, Serial No. 85143799  (TTAB January 29, 2015 ) (non-precedential) (available here). This is an appeal to the Trademark Trial and Appeal Board (TTAB) of a refusal to register the mark CALIFORNIA REPUBLIC in view of a prior registration for the following: 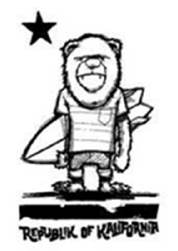 The goods associated with both marks include “jackets,” “pants,” “shoes,” and “shorts.”  Because there are identical goods in the application and the registration, the channels of trade and the classes of purchasers are considered to be the same in the likelihood of confusion analysis.

However, the TTAB here found that confusion is not likely because of the “crucial differences between the marks.”  In particular, the TTAB focused on the large image of a bear holding a surfboard. In addition, the use of the “K” in the phrase “REPUBLIK OF KALIFORNIA” and the star “bring to mind states of the former Soviet Union” while the CALIFORNIA REPUBLIC mark does not.  The overall commercial impression was found to be very different.  Thus, the first du Pont factor strongly outweighed the rest and the TTAB revered the refusal to register the mark CALIFORNIA REPUBLIC.  By my count, the prior registrant has until the end of today in which to oppose.

All are invited to join us in our discussion during the SoCal IP Institute meeting on Monday, February 9, 2015 at Noon in our Westlake Village office. This activity is approved for 1 hour of MCLE credit. If you will be joining us, please RSVP to Noelle Smith by 9 am Monday morning.