We will be discussing one Trademark Trial and Appeal Board case and one Federal Circuit case during our weekly SoCal IP Institute meeting on Monday, June 11, 2012. Brief synopses are presented below.

In an opposition case before the Trademark Trial and Appeal Board (TTAB), Research in Motion (RIM) opposed intent-to-use applications to register the mark CRACKBERRY for clothing items and marketing, computer and communications services. RIM previously registered the mark BLACKBERRY for “handheld devices including smart phones and related goods and services as well as promotional and collateral goods.”  RIM argued that the mark CRACKBERRY was likely to cause confusion with BLACKBERRY and dilute the distinctiveness of their famous trademark.

The defendants argued that their mark was a parody of BLACKBERRY.  However, the Board stated that the parody defense is available only if the parody is not used to designate the source of the applicant’s goods or services.

Given the similarities in sight and sound of the marks and the fact that the public began using the nickname “Crackberry” to refer to “addictive” BLACKBERRY devices before the defendants applied to register the CRACKBERRY mark, the TTAB found that the du Pont factors pointed to a likelihood of confusion.

Turning to the issue of dilution under Section 43(c) of the Lanham Act, the TTAB found that the BLACKBERRY trademark was sufficiently famous to meet the higher standard for fame required in the dilution context.  The TTAB found that the CRACKBERRY mark was likely to dilute, by blurring, the distinctiveness of the trademark BLACKBERRY.   The Board noted that there is “a high degree of similarity” between the marks.

In the Northern District of California, Apple filed a motion for preliminary injuction based on infringement of three of their design patents and a utility patent.  Apple argued that Samsung’s Galaxy S 4G and Infuse 4G smartphones infringed two of their design patents and that Samsung’s Galaxy Tab 10.1 tablet infringed another design patent.  Apple also argued that all three of Samsung’s devices infringed their utility patent toward the iPad and iPhone “bounce” feature.  The district court denied the motion stating that Samsung had raised substantial questions regarding the validity of two of Apple’s design patents and that the other Apple patents were likely valid and infringed, but Apple had failed to provide sufficient evidence on the issue of irreparable harm. 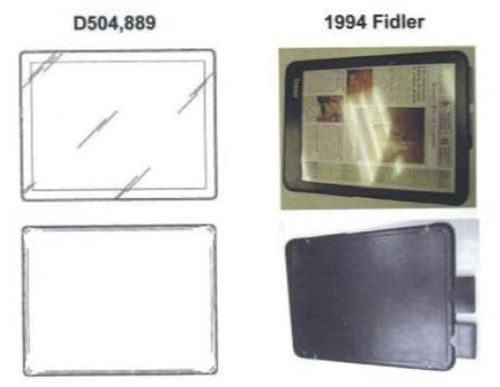 All are invited to join us in our discussion during the SoCal IP Institute meeting on Monday, June 11, 2012 at Noon in our Westlake Village office. This activity is approved for 1 hour of MCLE credit. If you will be joining us, please RSVP to Noelle Attalla by 9 am Monday morning.